The Nigerian government, through its Federal Ministry of Health, has since 2013 been issuing a new yellow card — the international certificate of vaccination — to combat forgery of the old one.

The Yellow Card Vaccination Card is issued to travelers from countries with high risk of the disease to certify as proof of vaccination by the holder.

Last year when Seyi Ogundoro — an analytics developer for an e-commerce business — was due to visit Ghana from Nigeria at a short notice, he rushed to a public health centre in Ibadan, Nigeria, to obtain a yellow fever vaccination card, an essential travel document within the ECOWAS Economic Community of West African States (ECOWAS) region.

He expected the entire procedure to be fast: a jab in the arm followed by the issuance of his vaccination certificate. He was shocked. “The staff at the health centre just asked for my personal details before collecting a sum of 1,000 naira (about US$5) for the card and a 200 naira (US$1) fee for taxi,” Ogundoro recalled. “I was never vaccinated!” Hours later, he slipped through Ghana’s Kotoka International Airport, holding a yellow card ‘credible’ in name only.

“The staff at the health centre just asked for my personal details before collecting a sum of 1,000 naira (about US$5) for the card … I was never vaccinated!”

It is unthinkable that a trained public health worker will readily breach standard vaccination practice.

The Yellow Fever Initiative — a joint collaboration of WHO and UNICEF working with national governments with the support of GAVI Alliance; and whose goal is to tackle the spread of the disease — maintains that yellow cards are key to effective monitoring of vaccination campaigns, and, therefore, must be distributed as a proof of vaccination.

Nonetheless, such level of negligence is very typical of the public health sector in Nigeria, Africa’s most populated country. Oftentimes, this systemic dysfunction is mostly underlined by ingrained corruption, institutional incompetence and ill-conceived policies. All three issues were visibly manifested in Ogundoro’s experience.

To understand the complexity of the problem, a modicum of history is needed. Yellow fever is a tropical disease whose impact is hardly felt in the developed world. The disease is transmitted mainly by Aedes and Haemagogus mosquitoes from monkeys to humans, and from person to person, says the WHO.

The most devastating outbreak of the last century occurred in the mid-80s but today, it still afflicts about 200,000 people a year, with 90 per cent of reported cases occurring in Africa, the WHO adds.

Because such a disease does not command the attention of big pharmaceutical corporations, only four manufacturers have been pre-qualified by by the WHO to produce yellow fever vaccines, explains Tomori Oyewale, the president of the Nigerian Academy of Science.

This partly explains why Nigeria ran out of vaccine supplies during the first phase of national vaccination campaign in early 2014. [1]

“Apart from the Institut Pasteur in Senegal, there is no other African country that produces yellow fever vaccine,” says Oyewale.

“So, it’s not something the industries are interested in [investing in] because they want money and if there’s no consistent policy on what you’re going to do with manufactured vaccines, it’s abandoned. Everything we do is about economics.

“Why did Ebola suddenly become so important to the West? Because it never threatened them! And I’m not blaming them. The point is if you can’t protect your own people, then something is wrong with you. That’s the difference between African governments and their Western counterparts.”

In a bid to verify the claims of Ogundoro, I paid two visits to the state-owned health centre where he had obtained his vaccination certificate in Ibadan. The Oyo State Health Office’s Epidemiological Unit is a run-down facility that is completely devoid of any semblance of management.

“There’s nothing wrong with private clinics giving the vaccine. That’s how we can get everybody vaccinated but it must be regulated.”

Upon arrival at the premises, visitors are welcomed to the sight of abandoned vehicles and overgrown bushes, both potential breeding sites for disease-causing parasites. The unmanned reception, peeling paintwork and crumbling furnishings all point to the absence of effective administration. On my first visit, an attendant confirmed the fee for the card as 1,000 naira (almost US$5) but when I returned two weeks later, another attendant disputed the figure, putting it at 1,500 naira (US$7.50) — a 50 per cent  increase.

When I asked for the reason for the discrepancy in the fee, the second attendant explained that the production of the vaccination certificates was no longer within the jurisdiction of the Oyo State government. “It is the federal government that is printing the card,” she said. “Those who are bringing the card are the people collecting the 500 naira.”

She further disclosed that the Abuja officials who supply the cards have no specific designated offices. Unlike the Port Health Centre (PHC) in Ibadan, an approved vaccination centre where the vaccine is properly administered and the corresponding certificate promptly issued, the understaffed Oyo State Health Office gives the vaccine on Mondays and Fridays but issues the certificate on Wednesdays. The PHC does not charge an additional US$2.50 either.

This lack of coordination and transparency in the modes of vaccine delivery between the public health agencies of the three tiers of government — federal, state and local — is a disincentive for accountability and efficiency. For example, all Federal Ministry of Health-approved vaccination centres are supplied with official stamps that come with a four-digit code for authentication purposes but this arrangement excludes unapproved ones.

A Need for Regulation

Centres such as the Oyo State Health Office are still vaccinating intending travellers. Admittedly, Nigeria is a very large country and national agencies do not have the capacity to cover all 36 states, 774 local government areas, and the Federal Capital Territory. Thus, there is no reason why state and local agencies cannot be authorised to issue certificates.

The main argument for the centralisation of the printing of the vaccination certificate is that it prevents falsification. This bureaucracy has created gaps in the supply chain of yellow fever vaccines from the federal to the local units.

Tomori agrees. “The National Primary Health Care Development Agency (NPHCDA) is charged with ensuring people all over the country are vaccinated,” he says.

“Health itself is under the concurrent list [of the Nigerian constitution], so a state can decide if it wants to procure the vaccine. Personally, I think the NPHCDA’s activity is too centralised.”

“There’s nothing wrong with private clinics giving the vaccine. That’s how we can get everybody vaccinated but it must be regulated. Those local clinics must work under standard guidelines set up by the NPHCDA.”

Tomori added that education is the only means by which we can ensure that health workers comply with best practices in vaccination programmes.

While Ogundoro was able to enter Ghana without being vaccinated last year, several Nigerians were not so lucky three years ago when immigration officials in South Africa denied them entry at the Oliver R. Tambo international airport in Johannesburg because they were carrying fake vaccination cards.

The incident embarrassed the Nigerian government so much that its Federal Ministry of Health initiated the centralised process for issuing vaccination certificates. The health minister, at that time, Onyebuchi Chukwu, affirmed that the new yellow card, which the government prints is of international standard and that it will be difficult to forge it. The minister also said that the card has been redesigned with many unique security features that will render the adulteration of the card very hard for forgers. 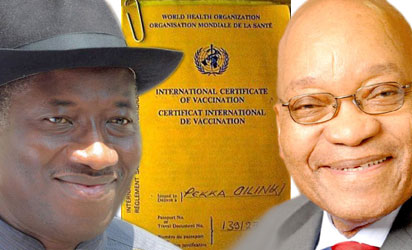 125 Nigerians, including a senator, aboard an Arik Air flight were denied entry into South Africa on account of alleged fake yellow fever vaccination card back in 2012 which sparked a face-off between Nigeria and South Africa. Photo Credit:  vanguardngr.com

Achiaka Irabor, a family medicine practitioner and head of the Total Quality Management Department at the University College Hospital, Ibadan, Nigeria’s foremost tertiary healthcare institution, explained that in the late 60’s vaccination cards used to be authenticated by affixing them with a sticker label peeled from a vaccine’s vial.