Twenty-three of the bodies have been identified, Supriatna said.

Supriatna said the C-130 Hercules took off from Jakarta’s Halim Perdanakusuma Airport on Tuesday with about 113 people on board, but it’s not clear how many people were on the plane when it crashed. It made two stops along the way — in Pekanbaru and Dumai.

Smoke rose among scorched buildings in the Indonesian city of Medan after the plane crashed near a residential neighborhood.

Maj. Gen. Fuad Basya, an Indonesian military spokesman, said the aircraft went down with 12 military personnel on board shortly after taking off from a base in Medan, the capital of North Sumatra province. 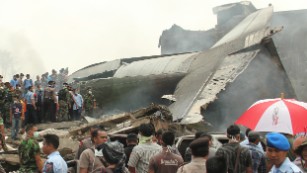 Local television broadcast images of crowds gathering around the plane’s smoldering wreckage amid damaged buildings and a charred car.

“There are definitely more than 50 victims,” said Zulkifli, an official from the Indonesian Red Cross who goes by only one name.

It was unclear what caused the disaster.

Basya said the aircraft, built in the United States in the 1960s, had been inspected and cleared to fly before it took off from Soewondo Air Force Base.

It was carrying logistical supplies for bases on other Indonesian islands.

The crash site is about 5 kilometers (3 miles) from the air base, he said.

Indonesia’s national news agency Antara reported that the plane hit a busy road that connects Medan with the highland tourist resort of Brastagi.