Inconsiderate passengers can make even the smoothest of flights a stressful experience. Just ask one disgruntled traveller who took issue with one particular neighbour – in the areas of rows 10 to 12 – who kept passing gas during the journey.

In fact, things got so bad at one point that the unhappy passenger even went so far as to pass a desperate note, written on a napkin, to a flight attendant.

The plea for help was then posted to Reddit by user Garwee20, who wrote: ‘My flight attendant mom got this napkin from an upset passenger.’

‘I don’t know if you can make an announcement,’ the note reads. ‘But if you can, you should say that whoever is farting in the areas of rows 10 to 12 should definitely see a doctor because they might have ass cancer’.

As it turns out, though, the situation may not have been the flatulent passenger’s fault.

University of Copenhagen clinical professor Jacob Rosenburg tells Metro that the average amount of times a person breaks wind each day is exacerbated in the air due to a drop in air cabin pressure. 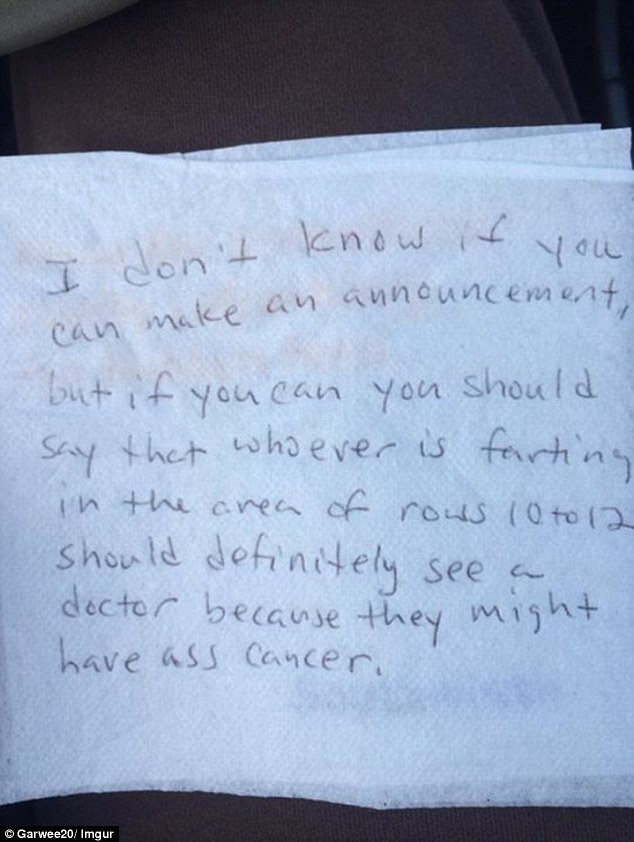 The note, which has since gone viral, reads that the flatulent passenger ‘should definitely see a doctor’

Still, being restricted to a confined space sure doesn’t help matters.

Of course, many Reddit users were curious as to whether the flight attendant actually made the announcement. (She didn’t.)

This isn’t the first time flatulence has caused trouble in the air.